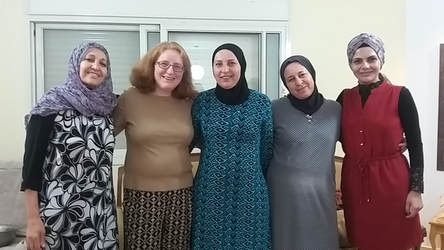 A Visit to Kfar Qara
By: Francine Dick

When Hmada got out of the car to meet me at Binyamina station, I was surprised how much he had changed in three years. I had hosted him and another fourteen-year-old boy in my Toronto home as part of the Heart to Heart program. Now he was taller and seemed more confident and hugged me warmly. I had become friends with him and his mother, Eatidal, on Facebook after his visit and was excited to be visiting them in their home of Kfar Qara.

Eatidal greeted me like an old friend, and I was delighted to finally meet her and her husband Bassam. The Masarwi home was cool and spacious, surrounded by flowering plants and lime trees. I barely had time to rest because I was to accompany the family to a wedding of Eatidal’s cousin. It turned out to be 5 hours of non-stop dancing and non-stop food. Eatidal had told everyone about me and I was greeted warmly by all.

Hmada was the oldest of the children, with two more sons and then a daughter, Maryam, the youngest. I was taken for a tour in Nazareth, and the following day Eatidal took me for brunch at her sister-in-law’s, at a table filled with women. One of the sons arrived, who was able to chat with me in English. He had studied electrical engineering at the Haifa Technion and now worked in high tech. In fact, so many of the people I met in Kfar Qara were highly educated – dentists, teachers, bankers and doctors. Yet problems persisted for them. One woman at the brunch, who worked as a kindergarten teacher on a kibbutz, had training to be a drama therapist. She told me that if she wore a hijab to work, she would be fired, not for wearing the hijab, of course, but for some other reason. Another young woman, a recent Jerusalem medical school graduate, would be interning at a hospital in Hadera. She had chosen to wear a hijab, an act of courage.

On my last night in Kfar Qara the family made a delicious bar-b-que. Bassam’s uncle joined us. He left Kfar Qara about 40 years ago. He had a degree in mechanical engineering from the Technion. But because he was an Arab, could not find work. He moved to the United States and ended up as a physics professor in Texas. He asked if I had been afraid to come to Kfar Qara. “Of course not,” I said, and added that everyone had been so kind to me. He said that I was braver than most people who live only a few kilometres away and would not come. Kfar Qara is an Arab town. No Jews live there. It is us and them.

My first night, as we drove to the wedding, Bassam asked what I thought about Heart to Heart. I said I thought it was a good program and a way to bridge differences. “We have to try something,” I said. “We’re tired of trying,” he replied. And his words stayed with me. At the bar-b-que I asked Hmada and his younger brother, Kareem, who also was a participant of Heart to Heart, how they felt. They did not feel hopeless but somewhat frustrated. The program is good, they said, but once it is over everyone goes back to their own world. Hmada kept in touch with a couple of the Jewish participants, but only infrequently. And what happens when the Jewish youth head off for their compulsory military service? Is all that good will lost?

Hmada is now attending the Technion to study electrical engineering. What are his job prospects in Israel? What will his life be like? Is there any chance for reconciliation and acceptance? There seems to be no progress on peace between Israel and her Palestinian neighbours, no goodwill on either side. Life still continues to be difficult for Arabs living in Israel. Still, I feel we have to try.